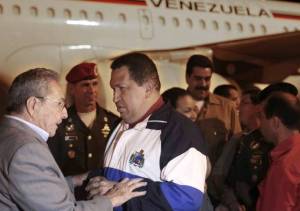 Cuban President Raul Castro welcomed his Venezuelan counterpart, Hugo Chavez, who will continue receiving the radiotherapy sessions that he began here last week, as part of his treatment against pelvic cancer.

According to the official press release published on Sunday, Raul Castro welcomed Chavez at the Jose Marti International Airport on Saturday night.

The two presidents held a brief and animated meeting at the airport, added the source.

Shortly before departing from Venezuela, Chavez explained that he would undergo radiotherapy treatment over the next five days, and will return to Caracas to rest for 48 hours before resuming treatment, which he expects to complete in five weeks.

“I will go to fulfill a commitment, to a battle that life brought me, a new battle, but I ask God and Christ the Redeemer to help me, in addition to the people’s love, to win this battle,” Chavez told national radio and television before departing for Havana.

The Venezuelan leader will run for reelection in the presidential elections on October 7, and almost all surveys grant him a clear victory over opposition candidate Henrique Capriles.