In the article “A Logical Analysis of the Mass Repressions Theory” we found out that the so called “tens of millions of repressed peoples” – are nothing but a bunch of far-fetched lies unable to withstand even the simplest logical analysis. But how were things actually? How many people were sent to GULAG and why? How terrifying was it to live, that is how high were the chances of being sent there in real life, not in the lies of TV-propaganda clowns?

Supposed image of a former Soviet GULAG. Note the lack of resemblance to a Nazi death camp.

There are very clear Soviet statistics regarding this, because it is totally impossible to handle millions of people without bookkeeping and data records. Moreover it is not even possible to run a hundred-man factory without bookkeeping, let alone a whole country. This data does exist, and no one from serious scientific communities questions the statistics of those years. Otherwise they would have had to make a crazy supposition that in 30s of 20th century the USSR jails kept 2 records of the statistics – a real one for them to use, and a fake one for the people that would live decades later.

Let’s have a look at the statistics. We will also find out how much truth there is in the theory that the Industrialization in the USSR was made by the hands of ‘many millions of slaves-prisoners’.

From 1939 to WWII, the number of prisoners was decreasing mainly because of setting them free after the completion of their sentence. The smallest percentage of ordinary criminals was in 1947 – 40% but at that time, the prisons were full of war criminals like parricides, deserters, collaborators, marauders, and other ‘innocent victims’ of this kind.

What do these numbers mean? Is it a lot or not? 1.9 million prisoners in the pike of ‘mass repressions’ or is it nothing unusual? Let’s compare these numbers with “the base of democracy”- the USA, where there are more than 2.3 million people imprisoned today.2

The US population is about 300 million, and the population of USSR of the 1930s was about 200 million. If we recount the proportion and imagine that the USA now has the population of the USSR in the 1930s then the US would have 1.53 million prisoners, a bit less than in the pike of the “repressions” (1.88 million), but more than in the “terrible 1937” and almost equal to number of all GULAG prisoners in 1939.

A photo, supposedly from the Soviet Belbaltlag labour camp. Compare the appearance of these prisoners to the photo below from a Nazi labour/concentration camp. 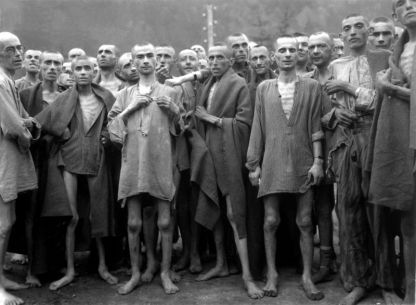 This is a substantiated photo from the Nazi Ebensee concentration camp.

Now in Russia there are about 1.1 million men and women in jails and prison camps. If we recalculate that in proportion to population of the USSR (145 to 200 million), then we see that the relative number of prisoners is 25% more than in the USSR in 1937 and 25% less than in the USSR in 1938. We can say that there is practically no difference – being imprisoned in the time of Stalin or Yeltsin-Putin regimes are equal.

The overall number of prisoners in the USSR was never more than 2% of the labor resources of the entire USSR. Thus the statement that “Industrialization in USSR was mainly done by enslaved prisoners” is nothing other than a blatant and bold lie. It is totally impossible that 2% could make any significant contribution to the economy and the industrialization. Moreover, the prisoners could only be used in the most unskilled jobs like digging, when modern industry and construction require highly-skilled workers.

The average percentage of prisoners in the USSR Industrialization was about 0.8 % of the USSR labour resources. We have to make a conclusion that the commitment of the prisoners labour in the building of the USSR economy is negligible.

The criminal situation in the USSR was very complicated: right after the Civil war when there were up to 4 million homeless children, and when there were thousands (!) of specially trained terrorists and commando squads infiltrated across the USSR border from Poland, Romania, Hungary, China, Finland etc, where they were hosted, supported and trained by their governments. It was also during that time when the USSR was practically a kind of military camp, and one war followed another: Middle Asia 1 -years of war (‘basmatch war’), war with China (‘KVZhD war’), Hasan conflict with Japan, Halhin-Gol war with Japan, not even mentioning WWII.

And despite all these wars and the country’s devastation the percentage of prisoners in the population in the Stalin’s USSR was the same as in the USA now.

“In reality the number of convicted prisoners with political counter-revolutionary conviction from 1921 to 1953 (33 years) make up the total of 3.8 million.”1

Who were the ‘political or counter-revolutionary criminals’? Convicted in these crimes were spies, parasites, terrorists, bandits who were supported from abroad, Hitler’s chasteners, collaborators, persons who carried out anti-soviet and anti-state propaganda (including Nazi and Japanese propagandists), and participants in anti-state rebellions. And in the condition of permanent wars were considered by Soviet Government as dangerous, etc. It should be taken into consideration that the Civil War had just finished, and there were a lot of former opponents of the Red Army who utterly hated the USSR and the Bolshevik regime. These ‘opponents’ were ready to go to any means to do any harm to the USSR.

These counter-revolutionary criminals were sentenced to very different punishments, including deportation and some city-banishment (765,180 persons).

The average imprisonment term in Gulag thus was less than 4 years – nothing overwhelming, especially if we compare it to the ‘stronghold of democracy and human rights’; in the USA 2007 the average sentence of imprisonment was more than 5 years (63 months) (http://www.albany.eduu/sourcebook/pdf/t5252007.pdf)

Why we do not hear the screams about US-GULAG that was worse than in Stalin’s time?

In the end of the 80s Michael Gorbachev ordered to create a so-called ‘rehabilitation commission’ that was further expanded in Yeltsin’s time. According to the conclusions of this ‘commission’: “According to the information of the office of the Attorney General 636,302 cases were reopened, in which there were 901,127 people involved and 637,614 of them were stated rehabilitated.”3 Please note, that only 636 302 cases were reopened because in all of the other cases, it was obvious that no criminals would be stated “rehabilitated”.

I beg your pardon, but where are the ‘many millions of victims’?

If we call the work of this ‘rehabilitation commission’ biased it would still be a far too gentle term, because what was happening there can be briefly described as completely lawless actions – people were ‘rehabilitated’ in a crowd in a few minutes! There were ‘rehabilitated’ crowds of obvious criminals. A lot can say that the attempt to claim general Vlasov (a parricide who joined Hitler and took part in massacres of civilians) an ‘innocent victim’ failed only because of mass indignation of WWII veterans.

A few cases opened to the public show fantastic insolence: ‘discharges’ of terrorists, wreckers and spies who were captured when they tried to cross the Soviet frontier with weapons in hand.

The chairman of this commission was famous liar and traitor Yakovlev, one of the key people in ‘Perestroika’. According to his directions to the commission “All people that were convicted as criminals by all non-court organizations are now considered innocent.” This statement is a fraud because they were military tribunals and the ‘court of three’ (“troika”) that were in fact tribunals created for faster processing of cases when the guilt of a criminal was obvious e.g. he was caught red-handed.4 All these criminals despite their approved crimes were called ‘victims of repressions’. 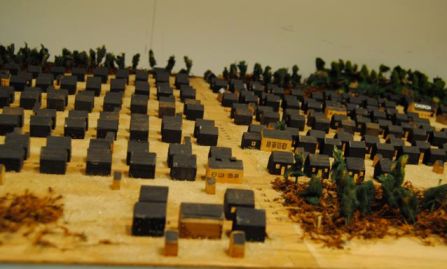 Model of a WWII-era Japanese-Canadian internment camp. Note the similarity to the GULAG. At that time, prison-labour camps were not unusual.

According to Yeltsin ‘rehabilitation law’ (part 5) people were called ‘innocent’ despite any legally obtained evidence that were confirmed guilty in court for the following crimes: “anti-Soviet propaganda” (including the war time), distribution of obvious lies that blackened the Soviet regime, encroachment on the rights of Soviet citizens under the pretence of devotions and even escape from Soviet jail if this person was called ‘repressed’.

So that means that according to the current regime in Russia it was considered lawful if someone escaped from jail because they were so-called “repressed”, or that it is fine if someone encroaches on the rights of Soviet citizens, and it is fine if someone runs anti-government lies and propaganda for the sake of enemy in war and pre-war time… All this does not make sense not only from the point of law but also from the point of common sense and fairness.

All ‘groundless mass rehabilitations’ cannot help the cons and traitors.

We can say that setting Yakovlev as chairmen of this kind of commission is the same as setting Goebbels of Hitler as chairmen of the Nuremberg tribunal or Judas Iscariot as a bartender of Jesus Christ. Photo image of the Lemon Creek internment camp for Japanese-Canadians.

Even with this boundless fraud and lies all official result of “Yakovlev commission” is 637,614 ‘victims’. No trace of ‘many millions’. This information is not so easy to find in Russia – it does not appear in the official media thus the wows about ‘many-millions repressions’ we can hear daily many times.

So, where are the ’32 millions of victims’ as Yakovlev claimed on meeting with Putin?5 Does it mean that it is borderless lie? Yes, it does. That was the main public motivation of killing the USSR, wasn’t it?

I have to emphasize the point – the hysteria about dozens of millions was not a sudden mistake – it is an operation of coverage and hiding the truth. Obviously 30 or 50 million citizens cannot be criminals, and if it was true then without any additional evidence the USSR could be convicted of a crime against humanity. But if we claim 600 thousand or even 3 million ‘victims’ in more than 30 years then the next question will rise immediately: “Why do you claim them as victims; maybe they are real criminals according the Soviet law of those times?” To announce them as ‘victims’ we need reopening these cases in fair and independent court with all appropriate procedures and before this no one can name them ‘innocent.’

The traitors like the Yakovlevs, Yeltsins, and ‘Gorbachevs’ did not have a chance in fair justice competition -even one of their declarations like ‘all prisoners who escaped from jail are claimed as innocent’ would be a good enough reason to kick them out of any fair court and even in return claim Yakovlev as a fraud. They perfectly knew (the Zemskov work was finished and published) that in case of any fair investigation the ‘mass repression’ claim does not have any chance to be won, and that’s why they started this repression hysteria that is totally controlled by their mass media.

What does it mean, that the country that was penalized to death was innocent? Yes, it does. The horrible crimes against humanity that were claimed against the Soviet Union are totally false.