Greece’s eurozone fate may now be in the hands of the 37-year-old political firebrand and his Syriza party.

Alexis Tsipras in his office at the Greek parliament building on Friday. He says Greece has been used as a guinea pig for the rest of Europe. Photograph: Martin Godwin

“I don’t believe in heroes or saviours,” says Alexis Tsipras, “but I do believe in fighting for rights … no one has the right to reduce a proud people to such a state of wretchedness and indignity.”

The man who holds the fate of the euro in his hands – as the leader of the Greek party willing to tear up the country’s €130bn (£100bn) bailout agreement – says Greece is on the frontline of a war that is engulfing Europe.

A long bombardment of “neo-liberal shock” – draconian tax rises and remorseless spending cuts – has left immense collateral damage. “We have never been in such a bad place,” he says, sleeves rolled up, staring hard into the middle distance, from behind the desk that he shares in his small parliamentary office. “After two and a half years of catastrophe, Greeks are on their knees. The social state has collapsed, one in two youngsters is out of work, there are people leaving en masse, the climate psychologically is one of pessimism, depression, mass suicides.” END_OF_DOCUMENT_TOKEN_TO_BE_REPLACED 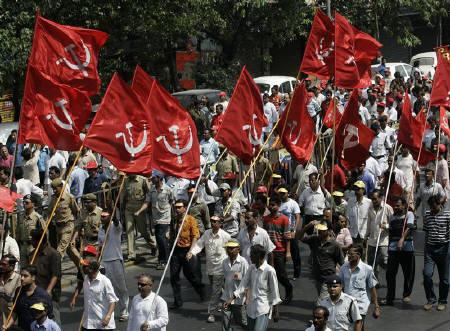 10.2 Parliamentary and extra-parliamentary forms: To achieve this task, the updated Programme noted: ‘The Communist Party of India (Marxist) strives to achieve the establishment of people’s democracy and socialist transformation through peaceful means. By developing a powerful mass revolutionary movement, by combining parliamentary and extra parliamentary forms of struggle, the working class and its allies will try their utmost to overcome the resistance of the forces of reaction and to bring about these transformations through peaceful means. However, it needs always to be borne in mind that the ruling classes never relinquish their power voluntarily. They seek to defy the will of the people and seek to reverse it by lawlessness and violence. It is, therefore, necessary for the revolutionary forces to be vigilant and so orient their work that they can face up to all contingencies, to any twist and turn in the political life of the country.’ END_OF_DOCUMENT_TOKEN_TO_BE_REPLACED

9.1 Following this shift in balance of forces in imperialism’s favour, we anticipated an aggressive all round attack not only ideologically but in all spheres against Marxism and Communism.

9.2 During these two decades, such trends have further intensified. These essentially attempt to reason that with the collapse of the USSR, there is a need to transcend Marxism. Hence, the theories of ‘revisiting’, ‘reassessing’ or ‘reconstructing’ Marxism have surfaced and are circulating in fashionable intellectual circles, influencing and confusing sections of the people.

9.3 Post-Modernism: Imperialist-driven globalization fuelled by global finance capital has spawned a whole new range of anti-Marxist ideologies and theories which are marked by the negation of all progressive, universalist ideologies. Theories of class convergence, disappearance of class struggle and the negation of the revolutionary role of the working class have been part of the bourgeois ideological armoury. To these is now added the current anti-Marxist theory of post-modernism. END_OF_DOCUMENT_TOKEN_TO_BE_REPLACED

7.1   The emergence of popular governments riding the wave of massive popular upsurge against imperialism and its neo-liberal offensive in Latin America has been popularly described as a ‘pink tide – turn to the Left’.

7.2   Many countries in Latin America are ruled by either Left-wing or progressive governments after winning democratic elections. Left-wing coalitions, including Communist parties, that have emerged in these countries are providing an alternative to imperialist globalization and neo-liberalism within capitalism. This experience is in direct contrast with the armed struggles that are continuing in countries like Peru and Colombia, demonstrating once again the futility of Left-adventurism. USA has set-up seven military bases in Colombia, mainly targeting Venezuela, by using a right-wing reactionary regime, under the pretext of ‘protecting democracy’ from ‘Left-wing’ militancy. END_OF_DOCUMENT_TOKEN_TO_BE_REPLACED

4.1   Following the shift in favour of imperialism in the international correlation of class forces, USA has embarked to consolidate its global hegemony by achieving its three declared objectives.

4.2   The first seeks the dissolution of the remaining socialist countries; the second, to render impotent either through defeat or co-option, third world nationalism, which materialized the Non-Aligned Movement following the decolonisation process; and, finally, the establishment of an unequivocal and unambiguous military and economic superiority over the world in general and particularly over perceived competitors.

4.3   This new world order is designed to operate in all spheres. [15] This, on the one hand, led to unleashing unilateral wars and the military occupation of Iraq. On the other hand, it led to the strengthening of the US military machine. [16] At the same time, the NATO, whose need for existence should have simply disappeared with the end of the Cold War, was further strengthened as imperialism’s global war machine.  END_OF_DOCUMENT_TOKEN_TO_BE_REPLACED

3.1   Such unfolding of imperialist globalization is, as we had analysed in our Party resolutions, unsustainable. Further, the 14th Congress resolution understanding that was reiterated in our Party Programme establishes the validity of Marx’s analysis of capitalism as a system that can never be either exploitation-free, or crisis-free. No amount of reform of capitalism can eliminate either or both of these fundamental characteristics as these are inextricably located in the very production process of capitalism generating its basic contradiction – between its social nature of production and individual nature of appropriation. This, in itself, negates all illusions spread by social democracy of reforming capitalism to have a ‘human face’.

3.2   The character and composition of labour – manual or mental (intellectual) – makes little difference to this process of exploitation. This exposes the fallacy of the argument that since the character of the working class (manual labour) has significantly altered in modern times from that of Marx’s time, and also, as the proportion of manual labour has significantly declined since Marx’s time, Marx’s analysis is no longer valid. As long as labour power produces in the capitalist production process, it is exploited and that is the source of surplus value and hence profit – the raison d’tre of capitalism. END_OF_DOCUMENT_TOKEN_TO_BE_REPLACED

Resolution on Agriculture and Farmers’ Plight

The 21st Congress of the CPI expresses its anguish and deep concern over the anti-people measures pursued by the Government in the centre and the states as well across the country with regards to agriculture sector and farmers community.

While Indian agriculture scenario is becoming gloomy day by day and around 70% of the population engaged in this sector are facing severe economic crisis resulting in the incidents of suicides committed by more than 2.5 lakh farmers, the governments are mostly reluctant to address the genuine problem rather becoming rhetoric and mostly undertaking the measures which lead to more pauperization. END_OF_DOCUMENT_TOKEN_TO_BE_REPLACED

The Red Hammer
Create a free website or blog at WordPress.com.