The Democratic People’s Republic of Korea leader, Kim Jong-un, and Foreign Minister, Pak Ui-chun, described the US and its Arab agents’ policies against Syria as ”state terrorism.” 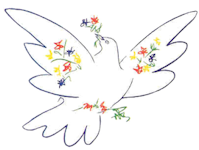